You may have heard in the news lately that the Heart Foundation is involved in a bit of controversy with the nutrition community. As a dietitian, practising here in Australia, I thought I would weigh in on the subject. 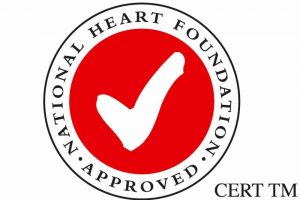 First of all, the Heart Foundation is an organisation dedicated to helping decrease the rates of heart disease and stroke in Australia. It does this by educating the population about the risks of cardiovascular disease and also partners with health organisations and community groups to develop programs to reduce the risk of this disease.

The specific program involved in the controversy at this time is called Tick, which was designed 25 years ago to help consumers make heart-healthy choices at the supermarket. The Heart Foundation labels certain items with an approved “Tick” so that shoppers will know which products are considered the best choices. There are over 2,000 products at this time that carry the Heart Foundation tick. These foods are Tick approved because they are lower in saturated fat, sodium, and calories and may contain more fibre and calcium than other choices. Generally, a program like this is great for shoppers in that it makes identifying healthier choices a lot easier.

The controversy lies in the 25 years since the program was developed, the nutritional science behind this advice has changed. The current advice by the Heart Foundation is based around consuming low fat or fat free foods that are generally highly processed and full of refined carbohydrates, especially sugar.

When fat is removed from food, something must be added for taste, usually food companies will add more sugar or salt to improve the palatability of the product. An example is Milo Cereal, which has received the Heart Foundation Tick since it is low in fat and contains some fibre, but is over 25% sugar! There is significant evidence that high sugar intake is actually linked to cardiovascular disease. A 2000 study, published in the American Journal of Clinical Nutrition, found that women who consumed a diet high in refined carbohydrates (i.e. sugar) were significantly more likely to develop cardiovascular disease within a 10 year period, even when other factors such as weight and smoking were taken into account. But the Heart Association seems to completely ignore this fact and continues to label these foods as heart healthy.

Secondly, processed foods, which are most of what is recommended by the Tick program, contain very little nutritional value. Most processed foods need to be fortified with vitamins and minerals since most of the nutrition content is lost during the manufacturing process. Other products that have received the tick include McCain’s Ham and Pineapple pizza, margarine, and pasta sauce, and even for a short time the McDonald’s Filet-o-Fish. Many foods on their approved list contain very few nutrients, a significant amount of sodium, and artificial sweeteners.

The bottom line is this, health authorities need to be willing to evaluate current research and modify recommendations based on new evidence. It has been accepted in the nutrition community for some time that processed foods are simply not as healthy as real, whole foods. Although these new recommendations are not a go-ahead to eat lots of saturated fat, nor should they be viewed as a scare tactic to tell people to stop eating all sugar, the research still needs to be evaluated.  As healthcare providers, we want people to eat whole foods that are unprocessed as the basis for their diet – and if that involves a little coconut oil or a little (note, only a little) butter, then that is okay – I’d rather have that than white bread spread with Nutella or jam! Luckily, it does seem that the Heart Foundation is listening to the petitioners. They have recently decided to review the tick and instead focus on the new star rating program by the federal government. They have yet to come out with new recommendations based on this review, but at least there is some hope for real health-promoting recommendations in the future.