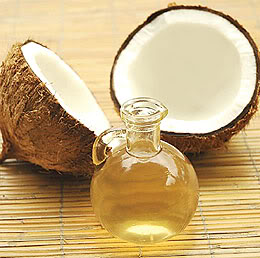 avoid coconut oil or foods cooked with it.  But, in recent years, several studies have begun to look closer at the health benefits of coconut as an exception to this rule. Coconut may actually be beneficial to health and may not need to be avoided.

Coconut oil is a solid fat at room temperature and it contains 97% saturated fat.  Due to its high saturated fat content, many nutrition experts have recommended avoiding this fat in diet. But, it is important to understand that there are many different types of saturated fats and not all of them act the same in the body. Coconut oil is made up of a type of saturated fat known as medium chain triglycerides (MCTs), such as lauric and myristic acid.  This type of saturated fat is different from the saturated fat found in animal fat which contains long-chain triglycerides which have a different molecular structure from the MCTs.  MCTs have been actually shown to increase HDL (good) cholesterol and lower total cholesterol.  One 2003 study, published in the Journal of Clinical Biochemistry found that virgin coconut oil lowered the total cholesterol, LDL, triglycerides and VLDL in rats. Researchers believe that this is due to the polyphenols in the coconut oil, which may act as an antioxidant, helping lower cholesterol. MCTs may also help reduce body fat by suppressing certain fat-producing genes.

Coconut oil may also be good to keep skin healthy. It is an excellent moisturiser and is high in Vitamin E. It can also be used to moisturise dry hair with split ends. If you are going to use it as a skin moisturiser use a very small amount as it goes a long way. It may also be important to test a small amount on one area just to make sure you don’t have an allergic reaction.

Although this research is positive for improving the reputation of coconut oil, don’t believe all the hype. Coconut oil promoters believe that coconut oil is the miracle cure we have all been waiting for to get rid of all illnesses. Many books, websites, and so-called experts claim that coconut oil can do everything from helping you lose weight to curing pancreatitis, diabetes, and even HIV. Although coconut oil may not be as bad as originally thought, it is not miraculous either, so be cautious with claims that seem too good to be true.

Should You Cook with Coconut Oil?

Coconut oil should be used with caution. Remember that regardless of its effect on cholesterol, it still contains 100 calories per tablespoon, like most fats. Coconut oil is a good option for cooking at high temperatures or for baking, since it is a saturated fat it is more stable when heated at high temperatures.  Due to its plant origin, coconut oil may be a better choice than most animal-derived saturated fats such as lard. Overall, coconut may not be the “evil” food we used to believe it was, but no matter what new research might say about it, moderation is always the key to any healthy diet.